Folk Classification of the Coconut Fruit

Stages of Growth and Name Changes of the Coconut

The classification and naming of things in a traditional society is called folk classification. In such a classification, dividing the environment based on the society’s inherent cultural values does not always match scientific classification. The various names of the shusseuo fish (fish that are called by different names as they grow larger), such as the yellowtail and mullet in Japanese, are a good example. There are few examples of this kind of naming of fruit trees. This is because fruits are generally only useful when they are ripe. People are less interested in unripe fruits. Nevertheless, in Tuvalu society, where coconuts are used in various forms, they are classified into six growth stages, as shown in the figure below.

niu (a generic term for coconut tree and fruit)

↓
motomoto
(fruit whose endosperm is about to harden) 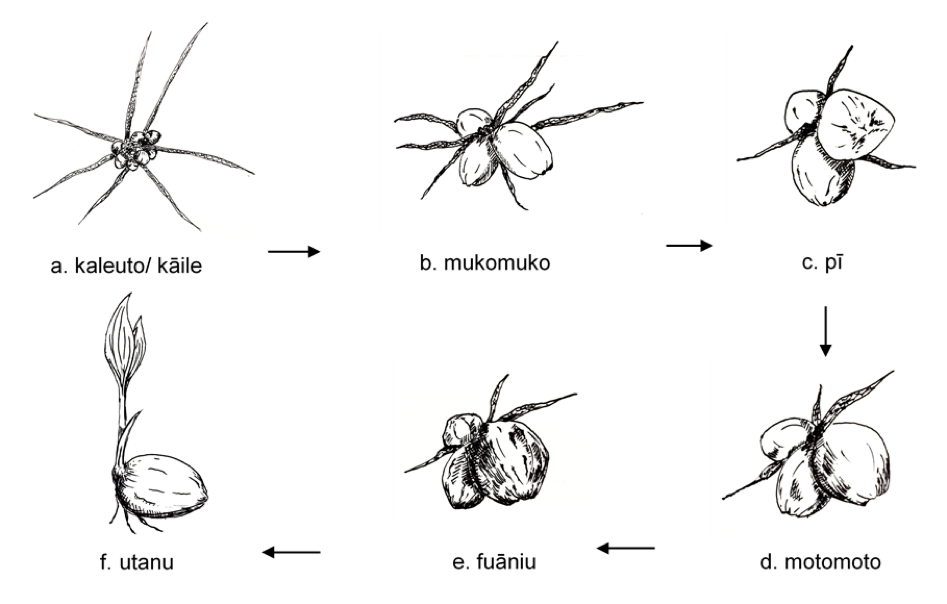 The Tuvaluan name for coconut is finely categorized by its stage of growth because for people, there is cultural value at each stage. Falefou (2017) describes the relationship between Tuvaluans and coconuts in the following terms.

The traditional everyday life of Tuvaluan people has almost always been associated with the coconut in one way or another. Besides drinking and eating coconut foods and drinks, people’s daily lives would always have to do with something related to coconut. These include old men’s traditional daily routine of making local strings known as kolokolo (sennit) out of coconut fiber; old women’s day-to-day work of weaving cookhouse mats (pakau or kapau), baskets and fans from coconut leaves; able-bodied men’s morning and evening chores of cutting toddy and collecting coconut fruits; young women’s involvement with preparing food from coconuts every day; and boys’ and girls’ work of collecting coconut firewood and sweeping the house using brooms made from coconut are but some of the ways in which the coconut has been part and parcel of the lives and livelihoods of Tuvaluans. As a result of such way of life, the coconut has become a strong nexus between the people and their land. Had it not been for the coconut, the people would have not been so closely connected to their land (Falefou 2017: 166–167).

The table below indicates which parts of the coconut are used for various purposes at each growth stage.

In Tuvaluan, the name used for the coconut changes depending on its stage of growth and its use. The following three names are especially common in everyday life.