The very first migration of the people from Asia heading for South Pacific islands started approximately, 3,300 years ago. The Polynesian people, who had extraordinary navigational skills, had taken such a long time to sail across the ocean, spreading around those islands. The final land where they reached 1,200 years ago after the long journey was Aotealoa: New Zealand. The migration of the Polynesian to New Zealand has been continuing, especially the number of migrant workers that increased after the Second World War. Moreover, since the New Zealand government set up Pacific Access Category, which offers a formal migration outlet for Tuvalu and other three island countries, namely, Fiji, Kiribati, and Tonga, the number of Tuvaluan migrants and their New Zealand born children has been increasing. Thus, international migration has always been common with the Tuvaluan people. It is common that someone in a family migrates overseas to obtain a better job and make remittance for the rest of the family remaining in Tuvalu.

The life in the severe environment in the small atoll country is always confronted with problems associated with the shortage or lack of resources, medical care, education, and job opportunity. Many of the Tuvaluan international migrants would claim that they have those problems mentioned above and that they decided to live overseas for “the better life.” One of the interviewees that I interviewed some years ago answered to my question “why did you come to Auckland?” saying that the first reason was education for his children. He continued, “not only school education but, for example, in Tuvalu, the animals you see are only dogs, cats, pigs, and birds … Kids have seen giraffes, elephants, or lions only in the encyclopedia. But you can see all the animals here in Auckland.” This was a very impressive response. Thus, international migration is the highly important option for the lives of the Tuvaluan people.

Conversely, international migration holds some severe problems when seen from the aspect of the maintenance of language and culture. According to the 2013 census of the New Zealand government, the percentage of the Tuvaluan people who speak their mother tongue is declining, especially the rate of young people, including New Zealand born children, being a significantly downward trend.

There are quite a few adults who feel a sense of crisis for the language and cultural problems of the younger generation. Some communities try to supply their children with opportunity to use the Tuvaluan language as much as possible, holding language lessons after Sunday services or in the evenings of weekdays. In addition, there is another remarkable event in Auckland, New Zealand. They hold a Tuvalu Language Week (Vaiaso o Te Gana Tuvalu) celebration once a year throughout the week including October 1st, the independence day of Tuvalu. If you visit Auckland in the week of the festival, then you can feel the Tuvaluans’ language and culture and their exuberant energy. 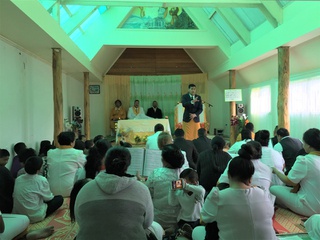 The Nanumean people gathering in their church 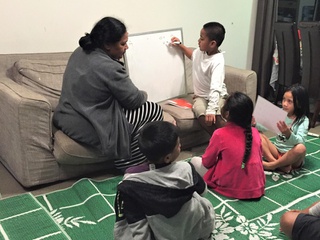